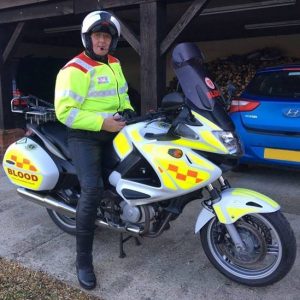 Norfolk Blood Bikes has been named charity of the year by Norwich Inns who were inspired by stories of their life-saving service.

Officially known as Serv Norfolk, the Blood Bikes are a group of 70 volunteers who deliver vital medical supplies to hospitals in Norfolk every day of the year.

The charity was up against 7 others for the title and won the majority of votes cast by members of Norwich Inns on Dec 8.

Secretary of Norwich Inns Craig McLaren said: “We are very happy to work with Blood Bikes and hope to raise as much money as we can and give them publicity so more people are aware of the work they do.“

Norfolk Blood Bikes was founded in 2011 and are entirely run by unpaid volunteers. They distribute blood, vaccines, instruments and donated breast milk to Queen Elizabeth, James Paget and Norfolk and Norwich University Hospital.

Volunteer Peter Hunt said: “When we found out we won it was unbelievable – we struggle to raise enough money and this year our target is to raise £50,000 with Norwich Inns to buy three bikes.”

Last month they made their 1,000th run of the year.

Mr Hunt added: “Our service saves people’s lives, without us people may not survive and we ease the enormous costs to the NHS out-of-hours transport.”